Delhi Crime is an Indian crime drama series written and directed by Richie Mehta. Starring Shefali Shah, Rasika Dugal, Adil Hussain and Rajesh Tailang, the series begins in the aftermath of the 2012 Delhi gang rape. Its first two episodes premiered at the 2019 Sundance Film Festival in the Indie Episodic category. The series was released on Netflix on 22 March 2019. The show was renewed for a second season with the main cast returning. Delhi Crime is based on the 2012 Delhi gang rape case that took place in the neighbourhood of Munirka, in South Delhi. The series follows the story in the aftermath of the gang rape, where Deputy Commissioner of Police (DCP), Vartika Chaturvedi sets up a task force to find the culprits, responsible for the assaults and death of the female victim.

What makes Delhi Crime so successful is that it makes for a good crime drama. There’s plenty of buildups and the suspense is good. The classic police-criminal chase fends for good entertainment. The series makes for good popcorn-munching, binge-watching TV.

Its terrific cast carries most of the weight of the show on their back. Shefali Shah shines bright in the role of ACP Vartika Kakar. She is a gritty, no-nonsense character and likes to get things done. She is leading the special task force and has an emotional attachment to the case, in part with her teenage daughter.

Other notable performances are that of Rasika Dugal, who plays a lowly-but-honest constable Neeti Singh, and Rajesh Tailang, who plays the pragmatic police officer Bhupendra Singh.

Yashaswini Dayama deserves special mention for playing Chandni, Vartika’s teenage daughter who hates Delhi and wants to move to Canada. She beautifully serves as the bridge between the common people and the police and is unafraid to call out her own mother over the inaction of the system.

The change of perspective

Delhi Crime provides the viewer with a fresh perspective on the 2012 rape case. It successfully brings forward Delhi Police’s side of the story, who became prey to the anger of the people. It helps people sympathize with them, and hear their story. The story also helps understand how bureaucracy can sometimes lead to the delay of justice. 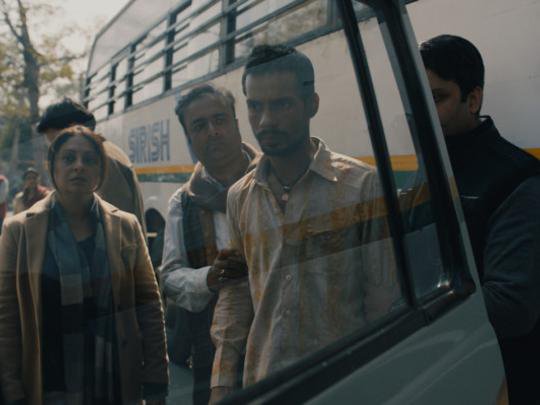 Delhi Crime also takes us into the mind of a rapist. The scene where the rapists justify their actions shows this.

The sensitivity towards rape

Another applaudable thing about Delhi Crime is that it deals with such a delicate issue with great sensitivity. Never once the narrative feels vulgar or cheap. The show talks about rape without ever showing that horrific incident. The victims are shown getting into the bus where it all happened but aren’t followed in. The worst is left to people’s imagination.

The downside to narrating the story from the system’s point of view is that it ends up seeming like a justification of actions (or their lack of). And that is exactly what happens in Delhi Crime. The whole story comes across as a sorry excuse for Delhi Police.

The story says that the police did what they could do; that they weren’t the part of the problem. They are shown as overworked yet underpaid. And that the red tape of bureaucracy led to delay of justice. The truth, however, wasn’t that simple. The situation was horrific, and it was complex. The bureaucracy, the police, the judiciary, the whole system was a little to blame.

The Antagonization of Protestors

The desperate need to make a hero out the police leads to villainization of the masses. The uproar of the people in the aftermath of this case is lack of patience; inability to give the police space for investigation. It celebrates the police for quick apprehension of perpetrators when doing so is what their job is.

This pro-police narrative drew a lot of flak for the inconsideration of the victim’s family.

The lack of focus on the victim’s struggle

Delhi Crime tweaks its plot for entertainment. Many decisions are taken for ‘Masala’. The focus on police struggles takes away the spotlight from the victim, who deserved the real focus. We are made to sympathise with Vartika Kakar, complete with backstory and everything. But the actual victim? She is nameless, painted as a fighter and a god but dehumanized in this narrative.

Delhi Crime, while gritty, makes for great entertainment but sometimes some things, like the 2012 Delhi Gang Rape, require special attention without tweaking it for binge-worthiness.

Delhi Crime is available for streaming on Netflix.

What’s coming on Zee5 in the month of November?